No description available. Item restricted until 2048.

Rae. Dogrib paradigms for linguist Robert Howren thru "after sleep, will saw wood'

Re-recording at University of Iowa. The story of Edzo and Akaitcho (and conversations) recorded on Jan 29, 1969 at the house of David Wetade in Rae.

The textual records consist of transcipts of the sound recordings in Chipewyan as well as English translations. The recordings contain interviews with elders that lived in Salt River in the 1920s and 1930s. The elders interviewed were Francois King Beaulieu, Maria Brown, Vincent Beaulieu, Liza Schaefer, Francois Laviolette and Fred Dawson. Topics covered in the interviews include history of Beaulieu family, house construction, animal husbandry, farming and the effect of the major flood that took place at Salt River Settlement during the 1930s.

The film is entitled "Dene Nation." The sound recordings document dance and music from "Our Land, Our Life" comprised of recordings from Fort Good Hope of drum music, Dene songs and Hareskin language; as well as audio from slide shows and films, including "My Country My People," "I Was Born Here" and "Dene Nation." The sound recordings from Fort Good Hope, likely recorded in 1957, feature members of the Pierrot, Kakfwi, Remi, Edgi, Masuzumi, Lafferty, Cotchilly, Taureau, Emmanuel, and Kelly families.

The textual records are comprised of copies of research, legal documents and reports related to Treaty 8, and is primarily concerned with taxation. The sound recording, entitled "The Winds of Change", was produced by CBC Calgary, most likely in the early-1970s. The documentary discussed the changes happening in the North. Northwest Territories' communities described in the piece included Tuktoyaktuk, Inuvik, Yellowknife, Fort Smith, and Hay River. 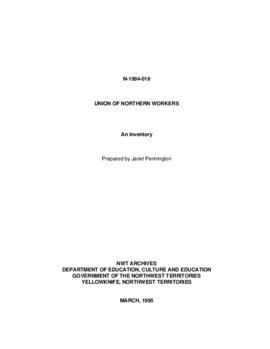 The records have been arranged into four series: textual records, photographs, sound recordings and moving images. The textual records were then organized into six sub-series: Minutes of Full Executive Meetings, Minutes of the Triennial Conventions, Minutes of Meetings of NWTPSA and UNW Locals, "Sulijuq" newsletters, Collective Agreeements and UNW Filing System. The textual records document the development of the union movement in the Northwest Territories and the increasing politicization of the union's membership. They also document the internal administration and operations of the NWTPSA and the UNW, and their relationship to the Public Service Alliance of Canada (PSAC). The records also depict the relationship between the NWTPSA, UNW and the Northwest Territories Federation of Labour (NWTFLA). The textual records contain information on convention procedures, elections, the collection of union dues, revisions to By-Laws and Policies, and the transfer of federal employees to the territorial government. The sound and video recordings were made at the Triennial Conventions and the Full Executive Meetings. The photographs were taken at the Triennial Conventions, Full Executive Meetings, and at individual members' work-sites. There are also images of such political action campaigns as the annual Day of Mourning ceremonies, marches in support of striking workers at the Inuvik Housing Authority, Royal Oak Mines Limited, the federal government and the Canadian Union of Postal Workers.