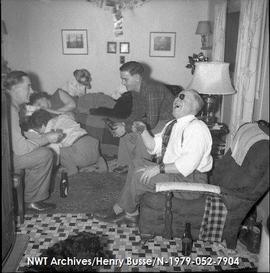 Slim Argue, Party [A man laughs during a New Years party in a living room. Two men talk behind him, and two women are in the back of the room. Yellowknife. January 1, 1951][Horace “Slim” Argue on the left front] 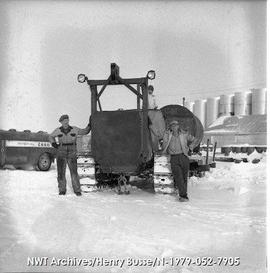 Imperial Oil, Cat Trains [Two men stand next to a caterpillar tractor by the tank farm on Jolliffe Island. Paul Vincent stands on the left, and Mr. Ted Cinnamon, an Imperial Oil agent, stands on the right. An Imperial Esso truck and fuel tanks are behind them. Yellowknife.] 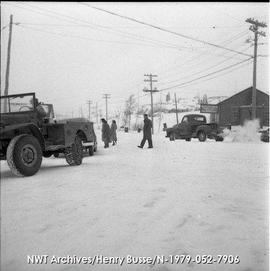 YK Taxi [Men and women walk on a Yellowknife street. The Boyles Bros Drilling building is at right. Yellowknife.] 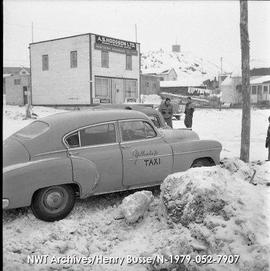 YK Taxi [A Yellowknife Taxi is in a snowbank in front of the A.S. Hodgson building, possibly a car accident. The water tower is visible on the rock in the background. Yellowknife.] 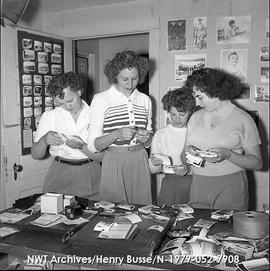 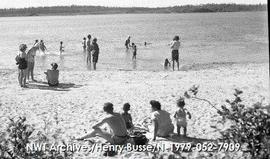 YK Beach [Men, women and children sit on the sand and play in the water at McNiven Beach on Frame Lake. Yellowknife.]

P[ost] C[ard] Sports [Dene men drum and play handgame while a crowd watches. They use matches as tallies. Yellowknife.] 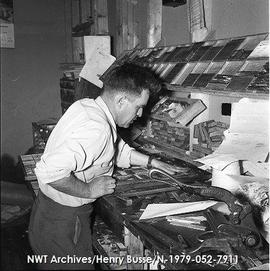 [Ted Horton, editor and publisher of News of the North newspaper, composes type in a form. He stands in front of a job case in his print shop in Yellowknife.] 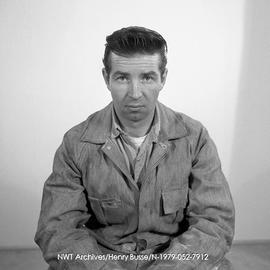