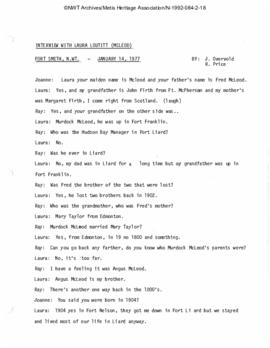 The file consists of an oral history interview with Laura Loutitt on February 14, 1977 in Fort Smith. The interviewers were Ray Price and Joanne Overvold.
Interview notes from 1992 Index: Father's name, Fred McLeod. He was born in Fort Franklin and died around 1964. Mother's name, Margaret Firth. She died in 1932. Laura's father was remarried in 1936 to Rose Lafferty. There were 15 children in Laura's family. Laura's maternal grandfather was John Firth from Fort McPherson. Her paternal grandfather, Murdoch McLeod, was born in Scotland but lived in Fort Franklin. Her paternal grandmother was Mary Taylor from Edmonton. Laura was born in Fort Nelson in 1904, but lived most of her life in Fort Liard. She married Colin Henry Loutitt from Fort Chipewyan in 1926. They had 11 children in total. One boy died at age 10 of pneumonia in 1932. Colin's mother's name was Helen Flett. His father's name was Peter Loutitt from Scotland. Colin was born in 1894.
A cousin of Laura Loutitt has been collecting information on the McLeod family. His address in 1977 was: Bud McLeod in Edmonton, Alberta. Laura recounts the story about what she knew about the murder of her father's two brothers, William and Frank McLeod in the Nahanni area, while they were prospecting for gold in 1902 [1906?]. Laura spent 8 years in school in Hay River. From there she went to Fort Providence for 3-4 months. Then she moved to Fort Smith to work as a housekeeper and cook for Billy Lion [Lyle] in 1923. In the fall of 1925, she was a housekeeper and cook for room and board and $25/month. She married in 1926 and moved to Fort Chipewyan for 4 years. She moved back to Fort Smith in 1930 and worked again as a housekeeper and cook until she got a job as cook for the NTCL Company. She worked in the summer and got laid off in the winter. Worked in between having 10 kids and cooking. Also worked on the boats for 10 years: on the Distributor for 2 years as cook, left that, had children and then worked on the Radium King. In the wintertime, when she wasn't working
on the boats, she was cooking at the hotel, at the DOT and She had her own cafe called "DO DROP IN .. 11 Laura also worked for the police for 17 years as a cook in Inuvik (10 years) and Fort Smith (7 years). There was a book written about Mickey Ryan called the "Link to the North. 11 Collin Henry Loutitt' s · regimental number was 3214784.