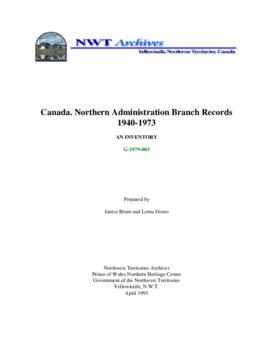 The records, transferred from the Federal Government in Ottawa to Yellowknife in 1967 include administrative and operational files. These files incorporate: correspondence, reports, vital statistic information, financial data, minutes, and a wide variety of reference material kept by the department. The files were classified via a numerical block system. The block system consisted of primary, secondary and tertiary levels such that a composite file number (for example 311-105-93) would represent a progression from general subject matter to a specific subject and/or location. The primary number block consisted of: 100 - Administration; 200 - Economic and Industrial Development; 300 - Engineering Projects; 400 - Forests and Game; 500 - Public Service; 600 - Education; 700 - Lands Division: Public Lands; 800 - Lands Division: Territorial Lands and Timber; 900 - Resources; 1000 - General files on settlements, associations, companies, provinces, foreign countries, Inuit affairs, and resources; 20 - Individual case files; 3 - Personnel and organizational files. These broad blocks were subsequently divided in smaller units and secondary and tertiary blocks. For example Forests and Games (400) subdivides into Warden Service (420), or Fisheries (430). None of the 700, 800 or 900 block files were forwarded to the NWT Archives. Moreover, at the time of transfer from Ottawa, it appears that other records from the file blocks brought to Yellowknife in 1967 were culled in Ottawa.

Part of Northwest Territories. Department of Industry and Development fonds

The records relate to the Northwest Territories' float that was entered in the Grey Cup Parade and contains newspaper clippings, two copies of the Miss Grey Cup Pageant handbook, correspondence, notes and information releases relating to Grey Cup activities. The photographs feature Emmeline Curley, Georgina Blondin and Jean Anne Hartley. The participation in the 1967 Grey Cup was the first official function of the Northwest Territories after the transfer of the Territorial Government to Yellowknife in 1967.

The material includes memorabilia from the 1973 Legislative Ball at the fictional "Fort Michener", a certificate in the name of Raymond the Raven, Pete Baker's certificate of election to the Council of the Northwest Territories, a commemorative brochure on Martin Frobisher signed by Capt. C. Frobisher, a notice concerning the establishment of the St. John Ambulance in the Northwest Territories, and a public notice concerning land ownership by the Chiefs in Council. These records were collected by Commissioner Stuart M. Hodgson.

The images depict the arts and crafts display and the Dene and Inuit demonstrations that took place at the 1976 Olympics. In addition, there are two copies of a brochure entitled "1976 Olympics, Government of the N.W.T. Arts and Crafts" and an introduction to the demonstration of games, dancing and drumming performed at the 1976 Montreal Olympics.

This accession, collected by Commissioner Stuart M. Hodgson, consists of a variety of unrelated material. Included in the collection is the transcript of an interview between [Clarence?] Johnson and [?] Fogg. The subject of the interview is Mr. Johnson's work aboard the ships "Emma" and "Nigalik". Also included in the collection are 5 unrelated photographs. The photographs include images of: Herbert Charles Wilson, speaker of the NWT Legislative Assembly from 1883-1888, Gordon Robertson, Game Wardens at Fort Smith, the unveiling of a plaque at the Northern United Place in Yellowknife and the NWT Council.

Records are comprised of NWT Scientific Research Licenses issued by the Science Advisory Board of the Northwest Territories between 1974 and 1977. The licenses are all numbered and note whom the license was issued to, what the purpose of the research was, the name of any sponsoring body, and the proposed itinerary for the completion of the research. Also included is a summary of scientists' and explorers' licenses issued between 1970 and 1973.

The material includes correspondence, minutes, annual reports, reports on the Territorial Museum, pamphlets, project files, archaeological and historic site regulations, and files on toponymic activities. Included among the correspondence files are the files from the Chairman of the Board, Alexander Stevenson and from the permanent secretary of the Board.

The records detail the meetings and products of meetings (Orders in Council, Ordinances) of the NWT Council. Records consist of agendas, reports and signed minutes for the majority of the sessions from 1921 to 1951 as well as copies of minutes and sessional papers from 1922-1950, which contain extra information beyond the signed minutes. Also included are files kept by the Secretary for each session (1921-1926), and meeting dossiers including calls to meetings, agendas, correspondence and minutes as kept by Dr. Charles Camsell, then Deputy of Minister of Mines and Member of NWT Council (1922-1936). Also included are copies of Ordinances for the Northwest Territories, both in published pamphlet and an incomplete alphabetical run and Index, compiled in [1948]. Finally, there are also copies of Orders in Council from 1905-1932, as well as a chronological list of Orders, 1873-1932, and a chronological list of Acts, 1869-1927.

This accession consists of correspondence and promotional material produced by the Prince of Wales Northern Heritage Centre relating to the Canada-wide Explore Your Heritage Programme and photographs of the Museumobile, a touring exhibit from the National Museum of Canada.

Part of Canada. Department of the Interior fonds

The textual material comprises an incomplete copy of L.T. Burwash's report entitled, "The Eskimo, Their Country and Its Resources: Economic Survey of the East Coasts of Hudson Bay and James Bay from Richmond Gulf to Rupert House, Including the Belcher and Other Adjacent Islands," Ottawa, Dept. of the Interior, 1927. (Typewritten.) The report contains a diary of the trip taken by Burwash, descriptions of Inuit life, food supplies, clothing, health, the influence of trading posts, housing conditions, and mineral and animal resources in the region. Much of the report focuses on the Inuit in the regions around Little Whale River and the Belcher Islands. Included in this report were photographs of communities along the eastern coast of Hudson Bay and James Bay and eight maps. The mounting of the photographs in this report suggests that this copy was a draft produced before its final publication.

The material is comprised of one ledger of fur sales (1939-1969) labeled "Fur for disposal on behalf of Department of Mines and Resources," one list of Trading Post and Outpost Licenses (1962-1977) and a list of "Trading Posts Northwest Territories, July 1, 1961" listing license numbers, names of applicants, location of posts and descriptions marked with handwritten amendments. The names and locations of stores and co-operatives are also included in the listing of Trading Posts.

Canada. Department of Mines and Resources

Part of Canada. Department of Mines and Resources fonds

The material, dating between 1948-1950, represents a compilation of 18 reports on forestry and wildlife management in the Northwest Territories. The photographs document the transfer of beaver and elk to Wood Buffalo Park.

Part of Canada. Department of the Interior fonds

This accession consists of correspondence from the files of O.S. Finnie, Acting Secretary. They concern a subscription to a press clipping service.

This accession includes correspondence from the files of two successive directors, J. Lorne Turner (1936) and R.A. Gibson (1937-1943). Included in the correspondence are a few items pertaining to R.A. Gibson's role as Deputy Commissioner (a position he held through this period, in addition to becoming director of the Lands, Northwest Territories and Yukon Branch in 1937). Material from J. Lorne Turner's file documents, among other issues, a food shortage in Coppermine in September 1936.

This accession consists of: a set of Interdepartmental Reindeer Committee minutes (1932-1941); an index for these minutes; a journal probably kept by Peter Kaglik at the reindeer experimental station at Aklavik (1938-1944); some miscellaneous financial records from an experimental station (1943-1944); a permit to enter the Kittigazuit Reindeer Grazing Reserve (1950); a variety of reindeer bulletins issued by federal departments (1931-1956); and a chronological history of activities concerning reindeer.

This accession consists of a transcript of the coroner's inquest dated 1 June 1954 on the death of Frederick Cardinal, the last person to be hanged in the Northwest Territories [found guilty of shooting his wife]; and a copy of the death certificate.

This accession consists of one report written by J. Lewis Robinson, entitled "Report on Physical Geography Study of the Western Arctic, 1947." This report was generated from personal observations by Robinson during a visit to the western arctic in August of 1947. The majority of the report focuses on observations made on Victoria Island, Prince of Wales Island, Somerset Island and the Boothia Peninsula; however, there are also notations concerning the topography from Yellowknife to Bathurst Inlet. The report, includes a diary of the trip and contains discussions of the topography, mapping, geology, ice conditions, vegetation and animal life. The report was originally produced for the Federal Government, Lands and Development Services Branch, Northwest Territories and Yukon Services.