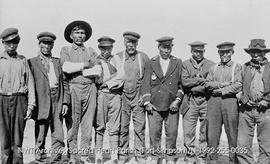 [Original caption from version of image held at Library and Archives Canada:] Chief Antoine and collection of Indians who interviewed Mr. Finnie at [Fort] Simpson, [N.W.T.]

[This photograph was taken by Oswald S. Finnie on behalf of the Department of Indian and Northern Affairs and shows a group of Dene men, possibly at Treaty time. The man in the center is Chief Antoine, in chief's uniform]