The file consists of a bound journal book. The first few pages are used as an autograph album belonging to a "Norm" in Norman Wells. After many blank pages, it becomes a journal of the 1996 Tulu project with a daily account of activities and sites visited, beginning in Norman Wells on July 3 and ending in Inuvik on the August 18. The remainder of the pages are blank.

A Partial History of the Metis of the Mackenzie River

The file consists of a document entitled "A Partial History of the Metis of the Mackenzie Basin 1790-1945 which was prepared for a Metis History Workshop held March 28-April 1, 1996 and also includes a description on work accomplished on the Metis history book, where information was gathered from, a workshop agenda, suggested topics for small group discussions, and an outline of big themes of Metis history.

["A Winter Circuit of our Arctic Coast" by Hudson Stuck - extracts]

[Act for the Preservation of Game in the Northwest Territories] 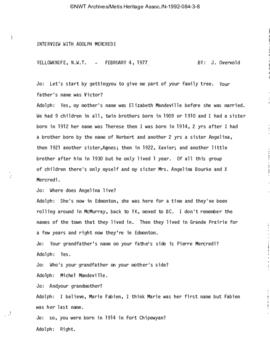 The file consists of the transcript of an oral history interview with Adolph Mercredi in Yellowknife on February 4, 1977. The interviewer was Joanne Overvold.
Interview notes from 1992 Index: Adolph's father, Victor Mercredi, was born on January 20, 1885 in Fort Chipewyan. Adolph's mother, Elizabeth Mandeville, was born in 1887 in Fort Resolution. There were 9 children born to Victor and Elizabeth. Twin brothers born in 1909 or 1910, Therese born in 1912, Adolph born in 1914 in Fort Chipewyan, Norbert born in 1916, Angelina born in 1918, Agnes born in 1921, Xavier born in 1922 and another brother born in 1930 (who only lived for 1 year). Adolph's paternal grandfather, Pierre Mercredi died in 1947. His paternal grandmother died in about 1952. His maternal grandfather was Michel Mandeville. His grandmother's name was Marie Fabien Mandeville. Adolph's paternal great. grandfather was Joseph McCarthy (the Mercredi name was originally McCarty or McCarthy). His paternal great grandmother was Mary Charlotte Laliberte, from Ile.-a-la-Crosse. She spoke Cree and Chipewyan. She died from the
Spanish Flu in 1922. Adolph married Martha Mcswain. Her parents names were Louise Cardinal and Johnny Mcswain. Adolph and Martha have 5 children: Louise, Josey, Evy, Bill and Nicolas. All were born in Fort Chipewyan except Evy was born in Fort Smith.

["Alaska and the Canadian Northwest: Our New Frontier" by Harold Griffin - extracts] 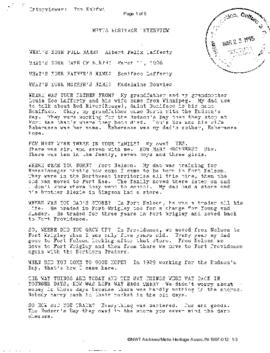 Transcripts of an interview with Albert Felix Lafferty, conducted by Tom Kakfwi for the Metis Heritage Association. Includes life story. 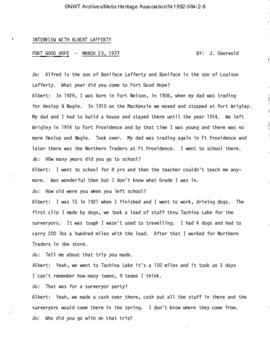 The file consists of the transcript of an oral history interview with Albert Lafferty on March 23, 1977 in Fort Good Hope. The interviewer is Joanne Overvold.
Interview notes from 1992 Index: Albert was born in Fort Nelson in 1906. His father was Boniface Lafferty. ·His grandfather was Louison Lafferty. Catherine Bouvier was his maternal grandmother (Beaulieu and Bouvier on Albert's mother's side and Lafferty on his dad's side). " ... and they all came from the same place, Manitoba. And my dad told me that Louis Riel was related to my dad on his (dad's/ mother's?) side. " [Al:] " ... I don't know if my grandfather Lafferty brought his family when he moved first to Fort Rae. [Jo:] Louison Lafferty di . [Al:] His first name was Lenoir, his original name was Lenoir he changed it Laferte as French. [Jo:] With an accent.
[Al:] Yeah and later on the Irishman spelled it Irish, it's not right should be Laferte, cuz there were lots of Laferte's in Fort Rae." Albert first was married to Monique Ritay [Ritias] in 1933. She died in 1938 from TB. They had no children. He then married Elizabeth Barnaby.
Story about how Little Chicago got its name. "They told me there was 3 hunters staying in a shack, long time ago. It was a long winter and they didn't get around along, they would argue and get into a fight. That's how it got its name and so they called it little Chicago." 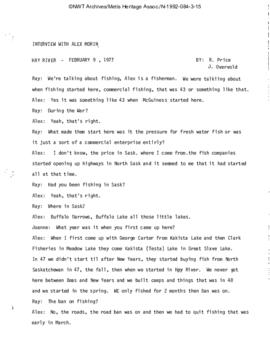 The file consists of the transcript from an oral history interview with Alex Morin in Hay River on February 9, 1977. The interviewers were Ray Price and Joanne Overvold.
Interview notes from 1992 Index: His mother's name was Bessie Daillon. His father, Dan Morin, was born in Meadow Lake. There was just his sister and he in the family. His brother died. He also has 2 half brothers and 2 half sisters. The Morin's come from Green Lake, Saskatchewan. There are also Morins in Sandy Bay, The Pas and Meadow Lake. Alex was married in 1950 in Saskatchewan. There is a lot of information in this interview about commercial fishing (on nets, quotas on catches, fishing areas around the lake, fishing companies, prices, types of fish including a discussion on "rough fish," accidents, different fishing areas on the lake, water conditions, parasites and working conditions.

[An Outline of the Eastern Arctic]