There are approximately 55,724 black and white and colour photographs in print, negative and slide formats that were generated or acquired by the Television and Radio Services Division, Department of Culture and Communications and by the Prince of Wales Northern Heritage Centre. The collection of photographs from Television and Radio Services document the Government of the Northwest Territories involvement in housing, education and training, arts and crafts, tourism, transportation and industry. There are also images documenting native land use, community activities, special events such as Expo '86 and Arctic Winter Games, public buildings and housing, Commissioners of the Northwest Territories, NWT Council, the Legislative Assembly and Members of the Legislative Assembly. The photographs from the Prince of Wales Northern Heritage Centre include photographs taken at Pine Point, Fort Resolution and Pangnirtung, as well as photographs created by archaeological and historic site surveys, and photographs of the Aviation Gallery at the Heritage Centre. The 132 audiocassettes, 155 sound reels and 4 DAT audio cassettes consist of recordings that were produced and collected by the Radio and Television Services Division of the Department of Culture and Communications between 1970-1986 and by the Northwest Territories Archives and Prince of Wales Northern Heritage Centre. The recordings include soundtracks for films, interviews, speeches, special effect sounds, Inuit throat singing and government programs such as the series "Behind Closed Doors-A Series on Spousal Assault in the Northwest Territories" and "So You Want to Start Your Own Business." The 25 16-mm films include copies of "You Can't Grow Potatoes Up There"; "Koukdjuak Crossing: Caribou Tagging on Baffin Island"; "Bathurst Inlet Caribou" (may also be titled: To Have Forever: Hunting the Bathurst Caribou Herd); "Nikko Island", "Wood Bison"; "Kellett's Storehouse"; "Yellowknife"; "Caribou"; "Heritage Centre Spots"; "Kissiutiyeet"; "Gordon Lake"; "Decisions"; "Future"; and "Anik Info Spots" (air prints). The Beta videocassettes contain videos produced by the Language Bureau of the Department of Culture and Communications. The films are entitled "MLA," "Home Maintenance-Northwest Territories Housing Corporation," "Home Maintenance-Canadian Mortgage Housing Corporation" and "How the Fur Trade Works" which is in South Slavey. The two helical scan videos consist of a Keewatin Economic Development Conference and the film "Hire North." Another Betamax cassette is of "Rivers of Faith" documenting Pope John Paul II's visit to Fort Simpson in 1987. The architectural drawings were generated by a project through the Northwest Territories Archives in which the old Catholic Mission building in Fort Resolution was documented.

Also contained in this fonds are materials dating from 1986-1991 including 3 Baffin Bulletin newsletters, 2 spousal assault newsletters, a report on spousal abuse, a report on the traditional knowledge working group, a directory guide of Northern cultural and arts performers from approximately 1990, and various press releases. 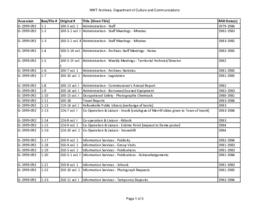 Records include minutes of staff meetings and Public Records Committee meetings, as well as correspondence and reports regarding reference requests, photo orders, acquisition of records, conservation, oral history, and legislation. The accession also includes several files created by the Records Management unit of the Department of Government Services, relating to scheduling and storage of government records. 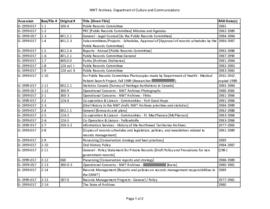 Records consist of minutes, agendas and reports from the Public Records Committee; reports and policies related to access to records, conservation, assistance with oral history projects, and records management; and correspondence with heritage organizations in Fort Good Hope, Fort McPherson, and Yellowknife. The accession includes some files which appear to have been created by the Records Management section of the Department of Government Services.

Records date from 1980-1997 and consist of minutes of meetings from Section Heads Staff Meetings, Cultural Affairs, Collections Committee, Exhibit Committee and Senior Management Committee (ECE). Records also include an annual report from the Public Records Committee and a file from the Records Management and Deputy Ministers Committee that includes comments from the NWT Archives. There are also promotional and development files from Education Services for events such as Heritage Day, Amazing Sundays and Open House, as well as files from the Geographic Names program including a decision paper about the program, as well as material concerning the transfer of the toponymy program from the Federal Government. Records also consist of a Heritage Training Assessment from the Museum Advisory Management section, a file concerning the reorganization of Culture and Heritage Division, strategic planning files and an Audit Bureau report on the Prince of Wales Northern Heritage Centre, as well as the response from the Prince of Wales Northern Heritage Centre to the report.

Records date from 1981-1983 and consists of 3 summary reports published by the Northwest Territories Archives on the archives of the City of Yellowknife, the church in northern Canada, and the archives of the Northwest Territories Council from 1921-1951. There are also pamphlets from the Prince of Wales Northern Heritage Centre on Kellett's storehouse, arctic exploration, archaeological resources, preserving the log tradition and tools from antiquity.

Records consist of administrative files of the Archives dating from 1978-1981.

Records include correspondence relating to reference requests, acquisitions, and information exchange with organizations and associations inside and outside the NWT.

Records include correspondence and drafts related to amendments to the Social Assistance Regulations, regulations under the Archives Act, and the Public Colleges Act, as well as an agreement between the Department of Education and the Northern Arts and Cultural Centre regarding the NACC facilities within Sir John Franklin High School.

The records document amendments to regulations under the Archives Act and the Public Colleges Act.

This fonds consists of eight 60-minute audiocassettes. In March of 1988, the Northwest Territories Archives Council held a workshop on oral history. One of the exercises of the workshop was for participants to interview each other on their personal histories.