The bulk of the textual material consists of records from the Directorate and the Policy and Planning divisions. These records include correspondence, working and discussion papers, legislative proposals and other records related to the amendment or enactment of Territorial legislation, including the Access to Information and Protection of Privacy Act and the Human Rights Act. There are also Deputy Minister and Ministerial chronos, as well as Ministerial briefing books.

There are records regarding conferences organized by the department, as well as correspondence and reports related to the reorganization of the Department, including documentation of Corrections and Lands Titles functions to the department, planning for division, aboriginal self-government, as well as Memorandum of Understanding (MOU) and services agreements between Justice and the Department of Social Services. There are records that document a gender equality review, amendments to the definition of spouse under the Family Law Act and Adoption Act, an investigative report on hiring practices in two correctional facilities, and a public awareness campaign about crystal meth, as well as records that document the Task Force on Legal Aid, and court reforms. The records also include judicial decisions of the Labour Standards Board for 2004-2005. As well, there are program review files, training proposals, discussion papers, action plans and reports from the following programs and divisions: Justice of the Peace program, Legal Services Board, Labour Standards Board, Territorial Firearms Officer, Maintenance Enforcement Program, Coroner’s Office, Corrections Division, Rental Office, Court Library and Court Reporters.

Records from the Liquor Licensing Board include sound recordings of board meetings with associated hearings and public meetings.

There are records from the Finance division regarding third-party funding agreements.

There are records from the Corrections Program including a review of Young Offender facilities in the NWT, and material from a conference that was hosted by the Department of Justice on forecasting correctional prison and supervision populations and community corrections. There are also records concerning strategic planning for the Department of Justice, development of the Youth Corrections Manual, as well as copies of Insight Newsletter which was a newsletter produced by the Yellowknife Correctional Centre. In addition, there are files concerning the transfer and implementation of Corrections services to Nunavut, a report from the Yellowknife Correctional Centre Inmate Advisory Committee requesting an Aboriginal Healing program, and copies of an operational review that was done by a consultant called "View of the Future of Social Services for the NWT," an annual report from the Mackenzie Courtworkers Service, minutes from Warden’s meetings and the Youth Justice Committee, and a manual produced for community-based Youth Justice Committees.

There are records from the Community Justice Division, including contribution and protocol agreements. These agreements include proposals or submissions made under the Victims Services Contribution Agreement Program, Victim Assistance Fund or Community Justice Committee Program and include copies of proposals, activity reports and final reports from communities and organizations that received funding under these programs. In addition, there program implementation and evaluation files for the Community Constable Program, Victims Impact Statement program, as well as discussion papers about the Community Justice program, strategic framework for the Victims Services Program, and an evaluation report on the Community Constable Program.

Also included in this fonds are 30 land grants, titles and transfers dating from 1913-1951. These documents are primarily oversized text documents, affixed with wax seals and ribbon. High-resolution digital .tif images of all 30 land title documents are available for reference purposes.

In addition, there are 12 bound settlement plans that originated from the Registries and Court Services Division. The plans are of settlement lots for the communities of Fort Smith, Fort Resolution, Hay River, Fort Providence, Fort Simpson, Fort Norman, Fort Good Hope, Fort Liard, Fort Rae, Fort Wrigley, and Fort McPherson. The plans are dated between 1898-1915. Also included from the division are the meeting minutes of the Court Management Committee and correspondence with the Status of Women Council regarding the usage of plain language in court orders.

The fonds also contains miscellaneous papers and reports including the “Conrad Report”, a working paper on amending the Jury Act and paper entitled "Study of Time Factors Involved in the Disposition of Cases in the Territorial Court, Northwest Territories" by Judge R.M. Bourassa.

There is also one file that originated from Vital Statistics entitled 'The Mad Trapper.' The file includes correspondence between the Registrar General of Vital Statistics and those seeking inquiries regarding the death and possible disinterment of the Mad Trapper, Albert Johnson. Also included are copies of the Warrant to Bury Albert Johnson at Aklavik issued in February 1932. A copy of Dick North's report on the question of Johnson's true identity, entitled 'Exhumation of Albert Johnson' is also included.

Records date from [1976]-1979 and include population estimates, family allowance statistics, evaluations of a drug and alcohol council, and two evaluations of Frobisher Bay after closure of a liquor store. There are also a number of program evaluations covering topics such as apprenticeship, daycare, subsidized term employment, rehabilitation of disabled persons, operations of a student residence in Fort Smith and in-service training.

This fonds includes records from the Directorate, including Ministerial and Deputy Minister Chronos and briefing books. It also includes records concerning the financial impact of division, including: proposals, workbooks, records of committees and executive summaries prepared by consultants. Also included in Directorate records are files relating to the purchase and transfer of the Northern Canada Power Commission to the GNWT.

Also within this fonds are records from the Finance and Fiscal Policy Division. The files include records related to the financial negotiations between the federal government and the related stakeholders involved in the division of the Northwest Territories and the creation of Nunavut in 1999. Records also include files of the Division Special Committee Working Group and the Northern Representatives (NERN) Committee, transfer of financial responsibility of Arctic Airports and fire management programs from the federal to territorial government, files tracking the changes and negotiations regarding property, education and income taxation, as well as economic policy issue files.

Records from the Corporate Affairs Division include files related to financial aspects of self-government agreements, amendments to the Liquor Act and Financial Administration Act, GNWT debt and borrowing, and a 1997 strategic plan for the department.

Records from the Internal Audit Bureau include meeting packages of the Audit Committee, which provides oversight for the Bureau.

As well, there are records from the NWT Liquor Commission, consisting of seven annual reports (38th to 44th) from the Commission. The reports date from 1992 to 1998. There is also correspondence regarding various issues with the public, appointments and revocations, and management of liquor warehouse and retail stores. The correspondence dates from 1995 to 2002. Records from the Liquor Licensing and Enforcement division include correspondence and notes from a public meeting in Yellowknife and a newsletter produced by the Liquor Licensing Board for licensees.

Accession consists of an unofficial consolidation of Liquor Regulations, 1977 from 1986 and an unofficial consolidation of the Liquor Act from 1985. It also includes "Community Museums Policy of the Northwest Territories," a discussion paper written in 1982 by the Prince of Wales Northern Heritage Centre Museum Advisor, Nicholas Tuele. A letter written by Bob Stevenson, Vice President of the Metis Association of the N.W.T is attached to the paper discussing the involvement of the Metis Association in the museums' operations and development. An interim report from the Dene Community Council on the Dene Language and Historical Research Project is also attached.

This fonds consists of approximately 9.5 cm of bound comic books and published reports produced by the Department of Social Development. The material dates from 1971 to 1977 and includes four bound comic books of Captain Alcohol, produced by the Alcohol Education Program of the Department in 1973. There are also several published reports on various topics such as correction services, health services, human resource planning and a cost of living study.

Records date from 1989-1995 and relate to policy and procedures, reports, departmental reorganization, the Labour Standards Board, the Liquor Licensing Board and various standing committees.

Records date from 1995-2002 and include files related to the activities of the Liquor Licensing Board.

Records date from 1997-2001 and include a report detailing Division Implementation Plans for division costing for all departments, as well as a consultation report on Yellowknife retail liquor service and a review of the regulatory reform measures bill in respect to amendments to the Liquor Act.

Records include correspondence and reports related to public meetings and the "Licensed to Serve" newsletter produced by the division.

Records include reports, briefing notes, decision papers, and other records related to amendments to the Liquor Act and GNWT debt and borrowing.

Northwest Territories. Department of the Executive

Part of Northwest Territories. Department of the Executive fonds

Prohibition in the North film

This accession consists of a film entitled "Prohibition in the North," a coproduction of the Government of the Northwest Territories' Department of Information and ACCESS. Directed by Peter Crass, the film outlines different systems of liquor control (prohibition, rationing and local control) in four different communities.

Records are comprised of one copy of a liquor list from the Pine Point Hotel circa 1967 with a menu for cocktails, wines, beers and liqueurs. On the back cover of the menu the Liquor License Regulations for the Northwest Territories are listed, including the legal drinking age of 21. 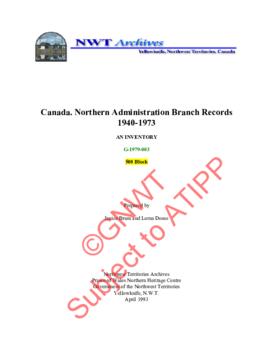 This block contains the following series: