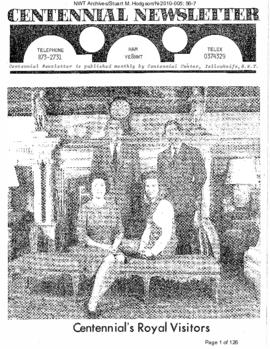 14 m of textual records and other material

While Hodgson was working in the lumber industry, Japan attacked Pearl Harbor. He decided to sign up for military service, and on July 2, 1942, reported for duty with the Royal Canadian Navy. The majority of his service was spent as an anti-aircraft gunner, running convoys of merchant vessels between Newfoundland and the British isles, patrolling routes around the United Kingdom, and as part of the convoy on the Murmansk run to deliver war materials to the Soviet Union.

After the war he returned to Vancouver Plywoods. In 1948, he helped organize the Vancouver chapter of the International Woodworkers of America (IWA) union. His involvement began whilst convincing his coworkers to remain loyal to the IWA and not join a communist splinter union. He went to work for the Vancouver local, and was quickly promoted to Financial Secretary in 1949, and in 1951, joined the Canadian Congress of Labour Executive Council.

One of the secretaries hired at the Vancouver chapter of IWA was Pearl Kereliuk, who became Stuart’s wife on July 28, 1951. They were married at St. George United Church in South Vancouver. They had two children, Eugene Allen and Lynne Mary.

Stuart Hodgson and his staff were tasked with “bringing the government to the people” on recommendation of the Carruthers Commission’s report of 1966 to the federal government. On September 18, 1967, with a small staff and their families, Stuart Hodgson set about the task of creating the territorial government in Yellowknife. Responsibilities transferred to the fledgling government from the federal operations were education, small business, public works, social services and local government. Shortly after their arrival, the 35th session of the Northwest Territories Council was the first legislative session held entirely in Yellowknife.

Commissioner Hodgson was nicknamed Umingmak, or muskox, by the Inuit, for his larger than life presence (and stature, at six foot three inches). He insisted upon yearly visits to every community in the territory, which at the time included what is now Nunavut. He felt it imperative to bring the government to the people, and to listen to their concerns in person.

Seeing the potential for increased visibility, Hodgson continually invited dignitaries, politicians and journalists north to see the Northwest Territories in person. He spearheaded a tourism campaign entitled Travel Arctic, which included the creation of the iconic three-legged polar bear.

Starting with Princess Alexandra in 1967, members of the Royal Family have consistently visited the NWT in their trips to Canada.

Commissioner Hodgson spent a great deal of effort coordinating NWT Centennial celebrations in 1970, a year which saw visits from Prime Minister Elliott Trudeau, Governor General Roland Michener and his wife Norah, as well as Queen Elizabeth II, Prince Philip, Duke of Edinburgh and their son and daughter Prince Charles and Princess Anne. Hodgson also helped to found the Arctic Winter Games, first held in Yellowknife in 1970 as an international circumpolar event for athletes.

While Commissioner of the Northwest Territories, he was appointed to Officer of the Order of Canada on December 18, 1970, for his services in labour relations and government. He was also awarded the Knight of Grace of St. John of Jerusalem in November 1971. Stuart’s wife Pearl Hodgson was appointed to Member of the Order of Canada on December 17, 1973 for her voluntary service in community programs in the Northwest Territories. Stuart was presented with the public service’s Outstanding Achievement Award in 1976, and was made an honorary doctorate of laws by the University of Calgary in 1977.

After his tenure as Commissioner, Stuart was Canadian co-chair of the US-Canadian International Joint Commission from 1979 to 1981. Following that, he moved back to his home province of British Columbia, recruited by then-Premier William R. Bennett to run BC Ferries. He was appointed chairman and CEO of BC Transit in 1985, until his retirement in 1992.

Stuart was appointed a citizenship judge in British Columbia in December 1997 and served until 2005. He received the Queen's Diamond Jubilee Medal in June 2012. Stuart passed away on December 18, 2015 in Vancouver, British Columbia at the age of 91.

This fonds consists of approximately 14 metres of textual records, 1226 b&w and colour photographic prints and slides, 31 audio recordings, and 1 film. Records detail the period just before and inclusive of Stuart Hodgson's term as Commissioner of the Northwest Territories (1967 to 1979), the move of government to the Territory, and the changes in government overtime, including the decentralisation of Territorial Government and the move to Local Government. The fonds also includes some documentation in his later work as Chair of the Canadian Section of the International Joint Commission, BC Ferries, and BC Transit. Records include professional and personal chronos including his entire tenure as Commissioner of the Northwest Territories, as well as correspondence specific to relations with the Department of Indian Affairs and Northern Development (and its later iterations), personal correspondence, public and legislative addresses, issue files during his tenure as Commissioner, planning for Royal visits, Commissioner and Legislative Balls, the NWT Centennial, Arctic Winter Games, community tours, day timers and diaries.

Portions of this fonds may be restricted.

Copyright held by the Government of the Northwest Territories.