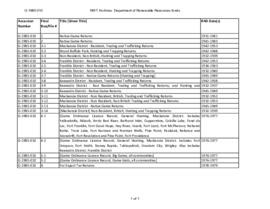 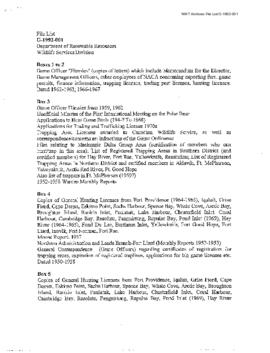 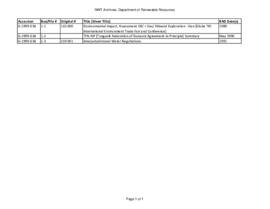 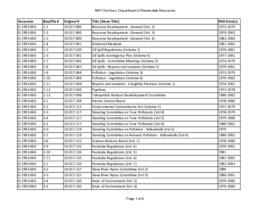 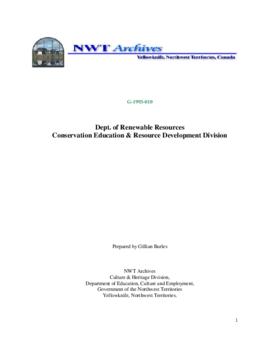 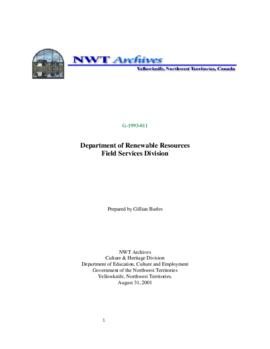 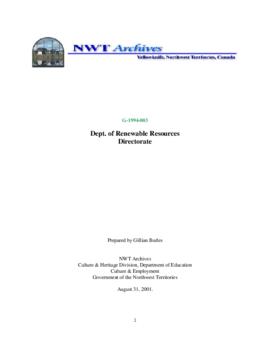 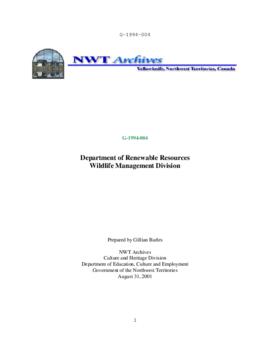 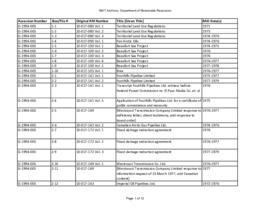 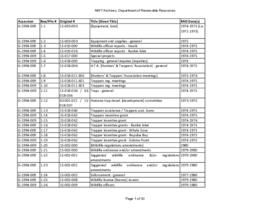 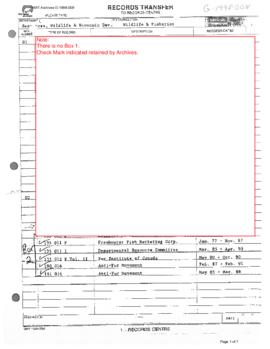 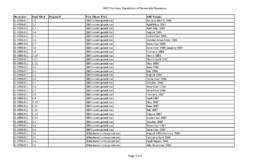 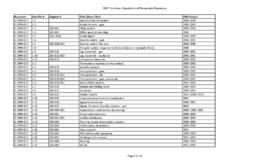 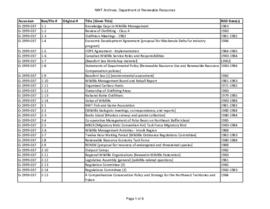 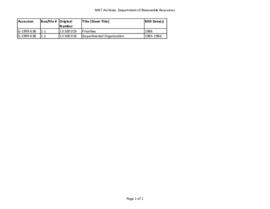 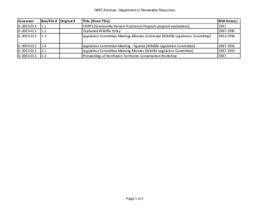 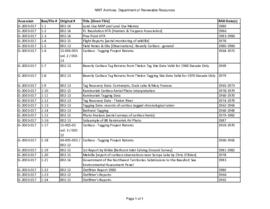 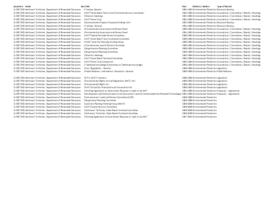 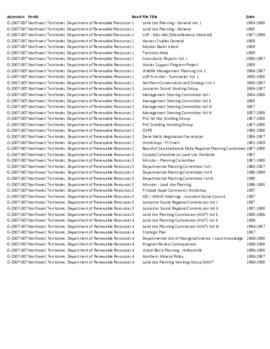 ca. 76.40 m of textual records and other material

The Department of Renewable Resources' responsibilities included wildlife, fisheries, water, forestry, land management and environmental protection. It managed wildlife and forest resources and ensured that the option of resource harvesting was maintained as a lifestyle and economic option for future generations in the Northwest Territories. The department was responsible for the support of the renewable resource economy and acted as the management and regulatory authority for wildlife and environmental protection. Furthermore, it had key responsibilities in planning for use of land and inland water resources. It participated in a wide range of Federal/Territorial committees and boards that coordinated and advised on land, inland water and offshore regulation and management programs. The department also advised and provided a territorial perspective on other areas of renewable resource management where the primary authority remained with the Federal Government.

Initially, the Department of Renewable Resources was made up of five divisions: the Directorate, Wildlife Service, Environmental Services, Energy Conservation and the Science Advisory Board of the Northwest Territories.

The Directorate Division provided overall direction, corporate planning, administrative support and coordination for the programs of the department, including the development of departmental policies. This division advised the Minister on the state of the programs and acted as a liaison with other government departments and organizations as required. The Directorate was responsible for the work of the Traditional Knowledge Working Group. The Directorate was also responsible for providing advice and support to the Aboriginal Rights and Constitutional Development Secretariat on all renewable resource related negotiations.

The Wildlife Services Division, later known as the Wildlife Management Division, was responsible for implementing programs designed to assess the status and productivity of wildlife populations. It provided advice on the limits of sustainable yield and land use activities as they affected wildlife populations. This division encouraged the conservation of the natural habitat, particularly for species upon which Northwest Territories residents depended. Effort focused primarily upon caribou, polar bear, gyrfalcon, and musk ox, with secondary projects that dealt with moose, wood bison, Dall's sheep, and fur-bearing animals. The division enforced quotas, issued licenses and permits, conducted research, conducted surveys and implemented tagging programs. Prior to the creation of the Field Services Division in 1982, the Wildlife Services Division also delivered funding and provided grants to the Hunters' and Trappers' Associations, as well as delivered wildlife management and awareness programs through the schools.

The Science Advisory Board was concerned with the development of a resident scientific community capable of planning and conducting northern research so that the priorities of northern people were fully realized. The Board's objective was to encourage the application of science, engineering and technology to improve life and living conditions for people in the Northwest Territories. The Science Advisory Board changed its name to the Science Institute of the Northwest Territories in 1986. In 1989-90, the Science Institute transferred from the Department of Renewable Resources and became an agency that reported directly to the Executive.

The Environmental Planning and Assessment Division operated between 1981-1985. It provided the departmental focus for the integration of renewable resource management programs and managed the environmental assessment and strategic planning response for major resource development projects. This division concentrated on land use planning, water management, environmental monitoring/surveillance, management of environmentally sensitive areas and was involved in formal regulatory hearings, such as the Beaufort Sea Environmental Assessment and Review Board hearings. When this division disbanded in 1985, the 'Planning' part of the division became the Policy and Planning Division.

The Policy and Planning Division was responsible for the following: providing advice to the Deputy Minister on matters of resource management, developing program evaluation systems, providing assistance to other divisions in the development of policy, developing public consultation strategies, coordinating the participation of the department in the formal assessment and review of resource development projects, coordinating the departmental involvement in the negotiation and implementation of Aboriginal Land Claims and coordinating the department's legislative requirements. Policy and Planning was involved in the negotiations of delegating inland fisheries management from the Federal Department of Fisheries and Oceans to the Department of Renewable Resources.

The Field Services Division was added to the Department of Renewable Resources in 1982 and it operated until 1987. It was created out of some of the services delivered by the Wildlife Services Division. In 1987, the name was changed to Conservation Education and Resource Development, although there was no change in the division's mandate or programs. Initially, the division provided advice and support to the entire department and emphasis was placed on public information and educational programs to make northern residents aware of the departmental programs and priorities. By the mid-1980's, the division provided conservation education, assistance to renewable resource harvesters and was responsible for developing the renewable resource economy. Major assistance programs were designed to support the hunting and trapping economy and an emphasis was placed on the fur industry and assisting trappers in acquiring and learning how to use new trapping systems. In addition, support was provided to organizations of resource users to enable them to become more involved in wildlife management. Programs such as trapper education, outpost camp programs, fur sales, firearm safety and conservation education were delivered by this division. In 1986, this division became involved with the Federal Government and Government of the Northwest Territories' Department of Economic Development and Tourism in the fish-stocking program.

In 1988, the Forestry Division, later known as Forest Management, was transferred to the department from the Federal Government. This division was responsible for the management and use of forest resources through the development of forest management plans that addressed how to develop the timber resources and protect them at the same time. In addition, this division developed and delivered at silvicultural program that was concerned with improving existing forests and establishing new forests through harvesting. The monitoring of insects and disease and issuing timber permits and licenses were also the responsibility of this division.

The Fire Operations Division was also added to the department in 1988; it was responsible for the coordination of the department's fire control planning and operations through establishing and implementing fire management plans according to territorial policy. The division was involved in fire prevention activities and training and delivered a public information program on forest fire management. In 1992, the Fire Operations Division changed its name to Forest Fire Management

The Field Operations Division emerged in 1989 and delivered all departmental programs at the regional and community level. There were Field Operations staff in most communities and they acted as the main interface between the department and the resource users. The staff provided advice and assistance to the Hunters' and Trappers' Associations, assisted resource users in resource development and resource use activities and assisted and advised communities in pollution control, fire suppression and wildlife management studies and enforced renewable resource legislation. In addition, this division interpreted and coordinated the department's responsibilities under land claims and worked with claimant organizations at the regional and local level.

There are also files that were created by the Forest and Wildlife office in Rae and Fort Smith. This material contains Robert Douglas' monthly patrol reports and correspondence from between 1951-1955. The reports include summaries of the warden's duties, weather reports, wildlife observations, hunting, trapping and fishing activities, lists of game taken and licenses issued, as well as the monitoring of animal species, particularly caribou. The remaining material from Fort Smith dates between 1987-1996 and contains files relating to Administration, Personnel, Policy and Directives, Finance and Budget, Training, Lands and Properties, Associations, Committees and Boards, Native Organizations, Wildlife and Habitat Management, Research and Field Studies, Resource Development, Fisheries and Forestry Legislation and Enforcement, Licenses and Permits, Conservation Education and Pollution Control. In addition, there are approximately 35 maps from this division that concern animal trapping in the Northwest Territories.

The material generated or managed by the Field Services Division between 1961-1986, consists of correspondence, minutes from Regional Superintendents and Regional Hunters and Trappers Associations meetings, field project reports, reports from regional and community wildlife officers, fur records, forms and reference material kept by the division. The records relate to a variety of activities such as: hunting, trapping, enforcement of regulations, animal studies, fisheries, training and organizational structure. Reports from the five administrative regions of the Government of the Northwest Territories (Fort Smith, Inuvik, Keewatin, Baffin and the Kitikmeot, which was once part of the Fort Smith region) have been kept in an effort to document regional activities and responses.

The textual material created and/or managed by the Directorate of the Department of Renewable Resources between 1975-1993, include correspondence of the Minister, Deputy Minister and Assistant Deputy. In addition, there are divisional reports, minutes of meetings, briefing notes, decision papers, Land Use Planning records, Management Steering Committee records, copies of submissions to environmental review boards and copies of agreements between the Federal Government and the GNWT. There is also a copy of an operational review of the department that was conducted between 1990-1991, a subsequent report and appendices of a departmental organizational review, and files related to enforcement issues and development of hunting regulations in the Liard/Mackenzie Corridor. Additionally, there are three files from the department library that relate to forestry and game officers from 1950-1969.

The records from the Environmental Planning and Assessment Division date from 1971 to 1991 and consist of land use planning evaluations, correspondence, policies, minutes of meetings, social impact studies and records relating to water management and planning, Inter-jurisdictional Water Negotiations and Environmental Impact-Assessment of Oil/Gas and Mineral Exploration.

The records from the Finance and Administration Division consist of files relating to Departmental Organization and Priorities. These records are dated between 1984-1986.

The three 16 mm film reels contain two films produced by the Department of Renewable Resources in conjunction with the Department of Culture and Communication. The first film is entitled "Koukdjuak Crossing: Caribou Tagging on Baffin Island." The film is available in English and Inuktitut. The second film, "Two Have Forever: Hunting the Bathurst Caribou Herd" was produced in 1986; it illustrates the importance of the Bathurst herd to the Inuit, Dene and non-natives. This film is available in English and Innuiaqtun. The accession containing approximately 395 videocassettes was produced by or for the Conservation Education and Resource Development Division of the Department of Renewable Resources. The videocassettes contain informational programming about wildlife management, trapping, fur handling, oil spill containment, hunting safety, firearm safety, information about Renewable Resources officers and projects, land use planning and wildlife conservation.

Part of the fonds is comprised of a series of posters produced the department for the annual National Wildlife Week Poster Contest; another series warns of the dangers of bears; a third series relates to Wildlife Regulations in relation to hunting and the export of animals/pelts/meat outside the Northwest Territories. The sound recordings consist of 3 audio reels and 6 DAT audiocassettes that contain recordings from a conference entitled "Fish, Fur and Game for the Future" held in February 1981. The remaining sound recordings, which consist of 14 audiocassettes and 1 audio reel, contain programs and radio ads that were produced by the department between 1985-1990. These programs and ads were aimed at teaching northerners about caring for the environment, educating them about the role of the department and raising awareness about new wildlife regulations. The audio reel contains the proceedings from a Fur Symposium held in Fort Resolution from 1986.

The remaining material within the fonds is comprised of published studies, reports, and brochures from the Department of Renewable Resources; the majority of material relates to its Wildlife Service subdivision between 1976 and approximately 1997. There are also approximately 5 cm of reports created by the Science Advisory Board of the Northwest Territories. The reports date from 1979-1982 and include the objectives of the Board as well as multiple topics including population studies, imported foods to the N.W.T., wind energy, aquatic resources, arctic marine mammals, dietary habits of native populations and animal management.

Copyright held by Government of the Northwest Territories.