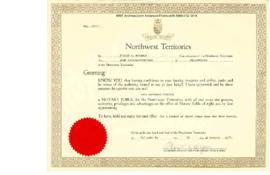 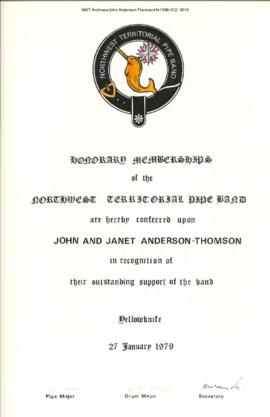 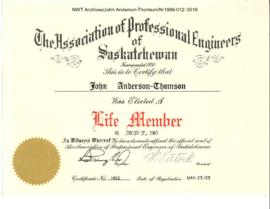 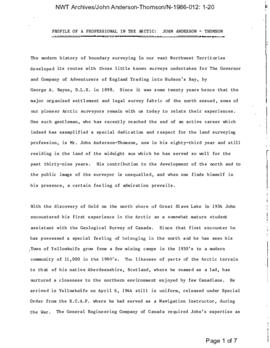 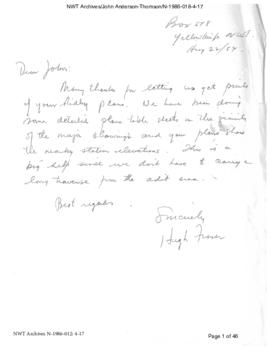 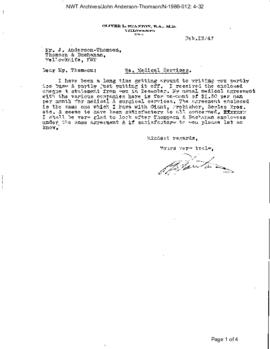 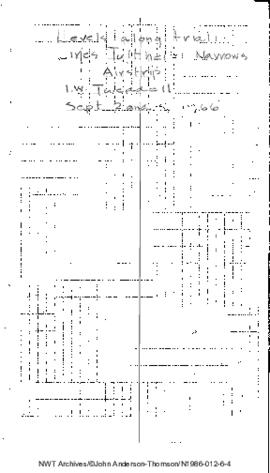 78.5 cm of textual records and other material

John Anderson Thomson was born on April 30, 1900 in Glengairn, Aberdeenshire, Scotland. He served in the Royal Flying Corps. during World War I, joining in 1917 at the age of 16. After being wounded and spending time in recovery, John immigrated to Canada in 1920, settling in Unity, Saskatchewan. He spent the next several years farming sheep and teaching school. In 1926, John returned to Scotland and married Janet Paterson, from Braemar, who had been born June 18, 1902. The Thomsons returned to Saskatchewan after their marriage. In the 1930s, John attended the University of Saskatchewan and in 1934 was a student assistant with the Geological Survey of Canada in the Arctic. In 1936, he graduated with a degree in geological engineering. John worked at the De Santis Gold Mine in Timmins, Ontario from 1937 to 1941 as geologist, mine engineer, and mine superintendent. From 1941 to 1942 he was Chief Engineer at Delnite Gold Mine, also in Timmins.
John served as an RCAF navigation instructor in Manitoba during WWII, from 1942 to 1944. On April 6, 1944, while still in uniform, he arrived in the north, employed by the General Engineering Company of Canada as a field engineer and geologist. Janet followed soon after. General Engineering had a contract to evaluate the mining properties of Yellowknife Gold Mines and Yellowknife Bear Mines. By 1946, General Engineering was no longer active in Yellowknife, but John decided to stay, gaining a contract with Negus Mines. Together with J. A. Buchanan, Dominion Land Surveyor (DLS) of Edmonton, he formed Thomson & Buchanan Engineers, Geologists and Surveyors. John articled under Buchanan and earned his own DLS commission in 1956. John also filled in as Mine Superintendent at Negus in 1949 when the regular superintendent was on leave.
John’s surveying and geological investigation work took him all over the Northwest Territories and what became Nunavut, to mining claims, communities, and larger centres such as Fort Smith, Fort Simpson, Hay River, Iqaluit, and Yellowknife. His work included water and sewer main layouts, roads, power line rights-of-way, lot and block surveys, site certificates, legal mineral claim surveys, and surveys for mining companies. John undertook many significant surveys over the years, including surveying the power line from the Discovery Mine to Bluefish Hydro, laying out the route of the Mackenzie Highway proposed by the Federal Government in 1947 and suggesting a better route, doing DEW line surveys and laying out airstrips in 1954, finding river crossings for a pipeline from Alaska to Alberta in 1969 (not constructed), surveying a pipeline from Norman Wells to Zama pipeline in 1979, and surveying and investigating the Slave River as part of a hydro feasibility study.
When John broke his knee-cap in the spring of 1958 and was unable to do fieldwork for the rest of the season, he took the opportunity to teach geology and surveying at the University of Saskatchewan. From 1958 to 1966, John spent summers doing field work in the north and winters teaching in Saskatoon and drafting plans. This winter/summer transition led to the Anderson-Thomson being the first travellers on the unfinished highway between Fort Providence and Yellowknife when they left too late in the season to bring their vehicle back to Yellowknife by ice road.
John Anderson-Thomson’s business was run under the banner of “Thomson and Buchanan” for a number of years, then as “John Anderson-Thomson”, and “John Anderson-Thomson Engineering & Surveying Ltd.” as of April 30, 1976. After working in cooperation with Underwood McLellan Associates, out of Edmonton, for a few years in the late 1970s, John Anderson-Thomson officially sold his business to them as of December 31, 1981 and retired from official practice in 1982, although he remained on retainer as a consultant. The name of the Yellowknife business became Thomson Underwood McLellan Surveys Ltd.
John was involved with a number of organizations and had many interests outside of his business. The Yellowknife Branch of the Canadian Institute of Mining and Metallurgy was established at the Anderson-Thomson house in 1945. John was also a member of the Saskatchewan Land Surveyors’ Association, Canadian Institute of Surveying, Association of Professional Engineers of Saskatchewan, and Association of Professional Engineers, Geologists and Geophysicists of the NWT. John received a Canadian Engineers’ Gold Medal Award from the Canadian Association of Professional Engineers in 1983.
In 1952, John assumed command of the No. 7 Company Canadian Rangers, on the request of the Governor General, Lord Alexander of Tunis. The Rangers participated in Exercise Bulldog III, a scenario to defend Yellowknife, in 1954, with great success. In 1954, he was appointed as Magistrate and Justice of the Peace, a position he held for the next 22 years. He earned himself the reputation of being a “hanging judge”, but received a special award from the RCMP at the end of his service. In 1959, John was invited to join the Royal Commission to determine the route for the Great Slave Lake railway from Pine Point to the current end of steel in Alberta. One of three commissioners, his minority report in favour of the western route, managed to convince Prime Minister Diefenbaker.
John also had a founding role in the layout of the Yellowknife Golf Course in 1947 and was a member for several years. He was also enjoyed shooting and curling.
Janet Anderson-Thomson was also influential, assisting John in his work, designing the NWT tartan, and accompanying the junior and senior choirs at Holy Trinity Anglican Church. Avid supporters of the NWT Pipe Band, the Anderson-Thomsons were given honourary membership in 1979. John and Janet were also joint recipients of the Commissioner’s Award for public service in the NWT in 1975.
Janet Anderson-Thomson died 1983. John passed away two years later on September 15, 1985 at his daughter’s home in Ontario. Their two daughters, Mary and Myrtle were each already married and had families of their own in Ontario.

The fonds consists of 78.5 cm of textual records, 122 maps, 146 photographs, 7 postcards, and 5 architectural drawings created by John Anderson Thomson in the course of his work as a land surveyor, consulting geologist, Commanding Officer of No. 7 Company Canadian Rangers, Magistrate and Justice of the Peace, commissioner on the Great Slave Lake Railway Royal Commission, member of several professional organizations, and participant in the community of Yellowknife and life in the North. Records and photographs of Janet Anderson-Thomson's involvement in John's work and her own leisure activities are also included. The records include memoirs, draft Royal Commission report, financial records, correspondence, field notes, geological, survey and reference plans, survey instructions, photographs and scrapbooks, certificates, and articles.

Bear Exploration and Radium Limited fonds and Canadian Institute of Mining and Metallurgy fonds arrived in the same acquisitions as John Anderson-Thomson's fonds.