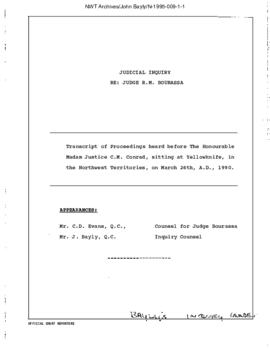 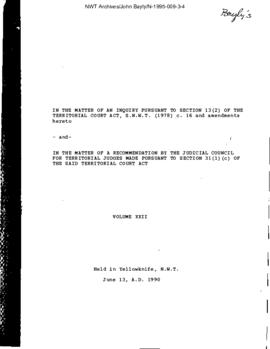 John U. Bayly was born on April 20, 1945 in Toronto, Ontario. He has enjoyed a long and varied career in the North and worked as both a Crown Attorney and private counsel in the communities of Kuujjuarapik or Great Whale River (Quebec), Rankin Inlet, Inuvik and Yellowknife. He was the founding partner of what later became Bayly Williams where he practiced between 1983-2000. Between 1984 and May 1985, Mr. Bayly chaired the NWT government's Task Force on Spousal Assault. Between 1981-1987, he served as Counsel and Negotiator for the Dene/Metis Land Claim Agreement-in-Principle. He served as the first Executive Director for the Legal Services Board of the NWT and was responsible for the delivery of legal aid public legal education and services throughout the NWT. In 1990, John U. Bayly was retained as Inquiry Counsel for a Judicial Inquiry into the conduct of Judge R.M. Bourassa (the Bourassa Inquiry). The inquiry was established following public outcry to remarks attributed to Judge Bourassa in a 1989 Edmonton Journal article suggesting that sexual assault among northern natives was less violent than in the south. Mr. Bayly was also a member of the Royal Canadian Mounted Police (RCMP) Public Complaints Commission for 12 years and he has represented a variety of aboriginal peoples organizations, including the Dene Nation, Committee for Original People's Entitlement (COPE), Inuit Tapirisat and Nunavut Tungavik Incorporated (NTI). Before there was a Law Society of the Northwest Territories, Mr. Bayly was the president of the NWT Bar Association for two years. He has been an active member of the Law Society of the Northwest Territories since 1978 and for 21 years he was the Chairman of its Discipline Committee. He is also a member of the Law Society of Upper Canada and the Law Society of Nunavut, the Canadian Bar Association and a director of the International Commission on Folk Law and Legal Pluralism. He is a past chairman of the Denendeh Conservation Board (1988-1991), a past member of the Historic Sites and Monuments Board of Canada (1988-1991) and the Canadian Arctic Resources Committee (1986-1989). Mr. Bayly served for seven years as the Chancellor of the Anglican Diocese of the Arctic. In March 2000, he was appointed to the position of Principal Secretary for the Government of the Northwest Territories. John Bayly died in Yellowknife February 17, 2004.

This fonds contains records gathered by John U. Bayly in his role as Inquiry Counsel for the Bourassa Inquiry. The Inquiry was conducted by Madam Justice Carole Conrad of Alberta and held in Yellowknife. The proceedings began on March 26, 1990 and ended with Madam Conrad's findings issued on September 28, 1990. The records consist of copies of preliminary proceedings, transcripts of the hearings, exhibits including one videocassette and one audio cassette of the press conference and public meeting held by GNWT Justice Minister Michael Ballantyne on Dec. 21, 1989. In addition, there are files containing submissions, letters of complaint, authorities, the inquiry findings and press clippings.

Copyright to the video and sound recording is held by the CBC.